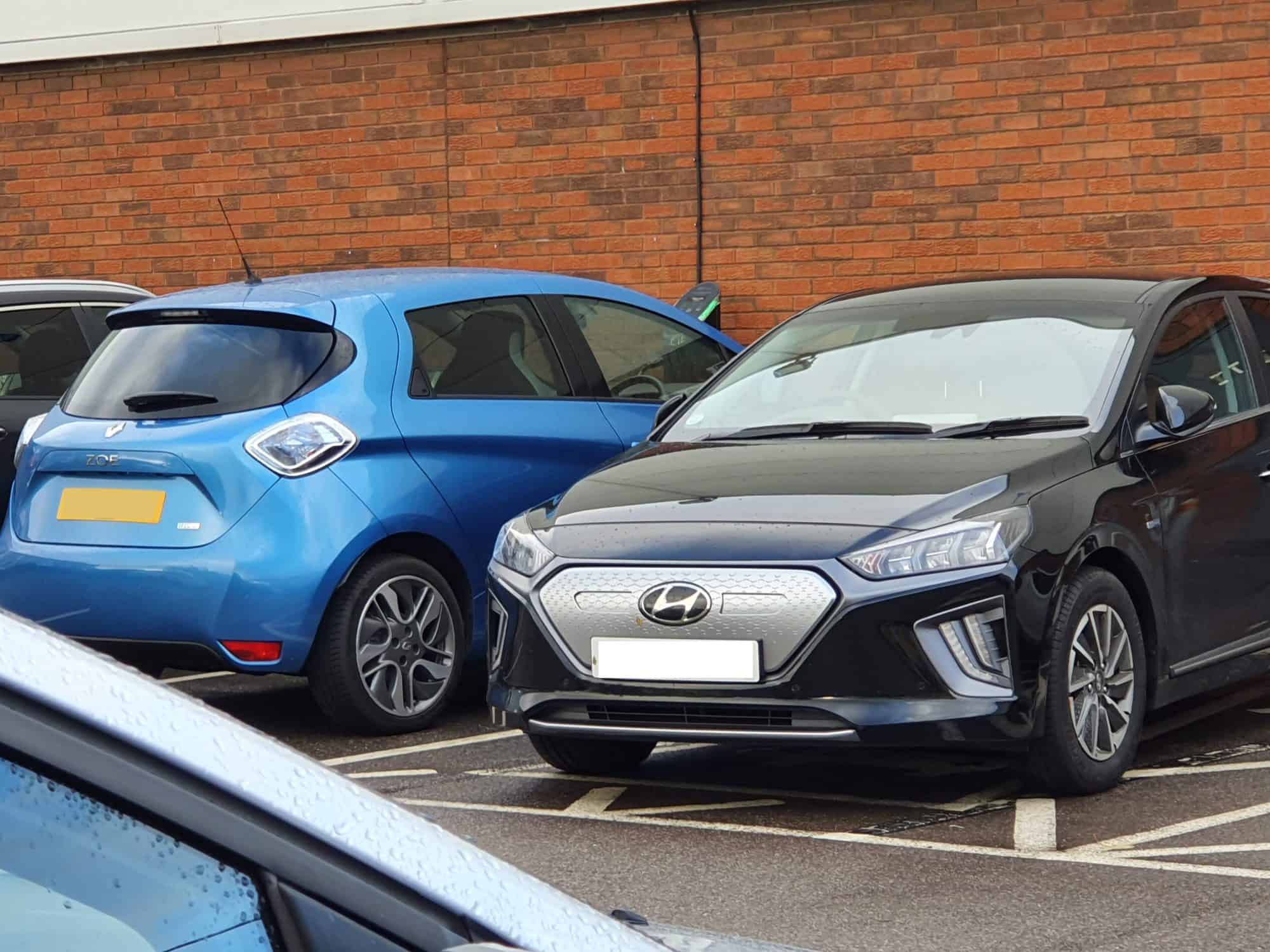 Electric cars come with huge promises of eco-friendly no-emissions driving, as well as the end of reliance on petrol stations as we adjust to charging our cars at home as we would any other of the many devices in our lives. There is one important question, however, that must be answered and understood: does an electric car lose charge when it’s parked up? In short, yes it does, and this phenomenon is known as the “Vampire Drain.”

Contents hide
1 Background: Differences Between EVs and Combustion-Engine Cars
2 What is “Vampire Drain”?
3 Is My EV Losing Charge While Parked?
4 How Can I Prevent Vampire Drain in My Car?
4.1 1. Keep the vehicle plugged in to maintain charge
4.2 2. Charge the vehicle to at least 80 percent before idling
4.3 3. Activate “Power Saving” Mode
4.4 4. Leave the Car Unplugged
4.5 5. Deactivate “Preconditioning” (Tesla) and Similar Preset Features
5 Impossible to Eliminate – Easy to Manage

We shouldn’t forget that all-electric cars are vastly different from those with traditional internal combustion engines. Where hybrid cars married the two styles in what was essentially an augmented regular car, an EV is a huge departure from both designs.

An EV doesn’t have the cumbersome engine. It’s powered by electric motors connected to a lithium-ion battery pack. Models vary in how they build their powertrain, but often the power source is loaded into the base of the vehicle, which helps lower the center of gravity. This makes for a very different driving experience. For example, the EV is quieter thanks to a lack of rattling and piston-firing noises that you get in a traditional engine. Second, the torque is typically powerful and the acceleration lightning quick. Teslas are known to get from 0 to 60 in under 4 seconds.

The other big difference between these two car styles is in fueling. Where traditional cars rely on either gasoline or diesel (including hybrid cars), an electric car relies on battery power and a steady current of electricity to recharge. Instead of a fuel cap and gas tank, you have a charge point which you can either hook up to a dryer electrical point in a garage, or a more powerful home charging station installed by an electrician. You may also use public fast charging stations while you’re out and about.

The advent of home fueling is the real game changer when it comes to looking at EVs and traditional cars. The ability to remove the need for stops at gas stations in our everyday driving means life is made that much easier for many.

What is “Vampire Drain”?

Like any other new technology out there, electric cars come with their own unique set of problems. While not detracting from the obvious advantages, they are essential to point out, especially the issue of so-called “Vampire Drain.” This is, interestingly, a mechanical area in which a traditional car and electric car are the same.

Both electric and gasoline cars are made to be driven. That’s not just some corporate slogan, it’s a mechanical truth. When a battery is left idle for long periods, it gradually loses its charge. They don’t lose it for exactly the same reason or at even the same rate, but it does happen. Electric cars are a lot less mechanical than traditional ones, and often contain much more electronic and computerized equipment.

Take a Tesla, for instance. When you park it up and lock the garage, your car doesn’t just stop working. It still operates a number of systems like battery monitoring, stand-by mode and many others. This is the cause of vampire drain in electric vehicles: sitting idly, monitoring itself and waiting to be turned back on again. The loss of power isn’t so dramatic, possibly a few miles of range per day of idling, but it can be more depending on the conditions.

Extreme temperatures both hot and cold tend to affect battery technology quite adversely, though an EV battery pack is well housed against these problems. The great difference with EVs and vampire drain compared to that of regular cars is the ability to monitor the battery condition. Many EVs and charging stations come with accompanying apps that display the state of your battery on your smartphone. So, if you want to maintain a healthy battery charge of 20 percent minimum and 80 percent maximum, you can do that. Only the very newest internal combustion cars – and then usually only at the top-end price bracket – offer such smart features.

Is My EV Losing Charge While Parked?

In light of the explanation I gave above, the simple answer is that most likely yes, your EV is losing some amount of charge while parked and idle. If you’re still plugging your car in each day and maintaining the charge level between 20 and 80 percent, then the amount you’ll lose to vampire drain will be minimal. It can only happen when the car is sitting and not charging, after all.

The main source of the problem in modern cars is the sheer number of electronically founded functions that the car relies upon to work properly. This means that even when “off,” the car is still doing something, and that requires power. Below I’ll go into more detail about what to do about vampire drain, and how you can minimize it.

How Can I Prevent Vampire Drain in My Car?

There are a few things you can do to prevent vampire drain. How much you can do does depend on the make and model of your particular electric car. Some allow more functionality than others.

1. Keep the vehicle plugged in to maintain charge

You might think that this is wasteful or risks “overcharging” the battery, but in fact it’s much worse to let the battery drain to zero or near-zero before charging, so maintaining an optimum charge level is a good idea. Furthermore, if you set the maximum charge level to 80 percent, then the charger will only work to do and maintain that level. It won’t continuously charge at full whack until you reach 100 percent.

2. Charge the vehicle to at least 80 percent before idling

To minimize the effects of vampire drain when you can’t leave your car plugged in continuously when idling, you should pre-charge it up to 80 percent – 90 if possible. This will at least leave you with as much charge as possible if you later need the car and vampire drain has occurred in the meantime.

Whatever your car calls it exactly – energy saving, power saving, etc – activate this setting on your car and it will minimize power consumption when idling. Your smartphone usually features the same function, deactivating various unnecessary systems in order to conserve energy.

If your car is a Tesla and thus partially relies on Internet connectivity to receive updates, or is by default standing by to connect with your key fob, you can deactivate this function by unchecking the “Always connect” button in the energy saving screen. Other cars may have a similar option to turn off auto-connecting, instead making the car wait for you to physically reactivate it.

No, we are not contradicting ourselves here. There are some models of car that actually benefit from the non-plugging-in approach. The Nissan Leaf, for example, when left unplugged will enter into its “Deep Sleep” mode to conserve energy. If your EV has a similar function to this, then follow that route to save on energy drain.

Is your electric car programmed with various presets? Is it set to wake up at certain times and activate climate controls to make the car perfect for when you usually set off to work or to do the school run? These presets should be turned off if you know your car is going to be idle for a while. It should be a matter of just pushing a button or two in the car itself or via your smartphone.

Impossible to Eliminate – Easy to Manage

The issue of vampire drain is not 100 percent solvable. As long as your car is doing anything at all, however minor, it will expend battery power. You can, however, minimize these effects by taking the steps we mention above. It’s especially important to consider these points if you know that your car is going to be idle for an extended period of time beyond a few days. Stay charged and stay safe.