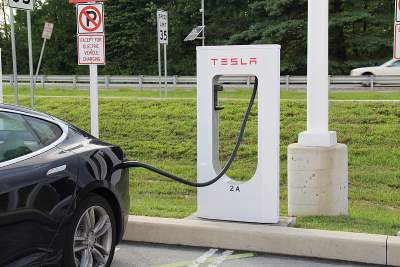 Arguably the biggest change of all when it comes to the electrification of modern passenger cars is the fueling. No longer do we “fill up” our cars at the pumps, and no longer are we forced to rely on a network of public stations to provide us with our fuel. Electric vehicles provide a new dimension to ‘fueling,’ namely that you can – for the first time ever – refuel your car entirely at home.

But if you own a Tesla, is this wise – or should you instead use the superfast ‘Supercharging’ network that Tesla have built for you and other Tesla owners? The short answer is that at home charging is usually cheaper (even after factoring in the cost of the home charging equipment), but this short answer doesn’t tell the full story…

When the idea was suggested that you would plug your car into your home supply of electricity to recharge just as you would a smartphone or a laptop, horror was the natural reaction of many. They just imagined how much power it would take and how their electricity bills would skyrocket. In fact, the opposite situation turned out to be the case.

This matches our own green car fuelling guide which also compares hybrids.

There are many other factors to consider when you compare the overall costs of buying and owning EV and gasoline cars, of course, but for today’s blog, we are mainly interested in charging.

So, charging was shown by the Car and Driver study to be cheaper overall than it was filling up at the gas station. EVs are of course much more efficient with their use of power, too. An internal combustion engine is only about 20- or 30-percent efficient, with much of the fuel’s energy being lost as heat or fumes. An EV powertrain and drivetrain is up to 95 percent efficient.

One interesting difference with Tesla is the existence of their own Tesla Supercharger network. They also make their own line of home charging products like their flagship Tesla type 2 home wall charging unit. Which of them is cheaper? That’s what we will explore below.

First, let’s look at the Supercharger Network and how much it costs to use it. The network is already global, with (as of March 2020) more than 16,000 Superchargers located in 1,826 stations around the world. Tesla Supercharger stations are placed strategically both in built-up locations and along major highways and other roads where both short- and long-distance drivers will find them in time (hopefully) before they completely run out of power. Although, it has taken a while for the built-up-area locations to start catching up with highway locations where most are still placed.

The main USP of the Supercharger, as the name seems to suggest, is the incredibly fast charging times that can be achieved without doing any serious damage to the Tesla battery pack. The stations charge customers either per minute that they are using the Supercharger, or per kWh of power drawn from the charger. Below is a typical costing, but please note that the real cost does vary based on geographical location:

Charging at all is a bit controversial as there were once many free Supercharging programs available for Tesla drivers. In May 2020, the company removed any mention of free unlimited Supercharging from its sales site, but some already in-stock inventory items still had it. In any event, it seemed that this privilege had been removed. There are still some limited offers where buyers might get 1,000 free Supercharging miles with their purchase. As Tesla prices were steadily reduced, the economy of unlimited free access to Supercharging naturally became less economical.

It was in 2019 where Tesla made adjustments to pricing from a state/region model to a “per station” model where prices in the immediate area were taken into account. That sent prices much higher for some, where energy costs are already sky high. In December 2020, whichcar.com in Australia published a piece that decried “Tesla supercharging now more expensive than petrol refueling.”

Using Tesla Supercharger stations is highly convenient for two reasons, however. The first is that you can find the nearest Tesla Superchargers with the push of a button on your Tesla touchscreen system. Better yet, it differentiates the ones that are in range with your current battery level from the ones that aren’t by making in-range chargers bright red and out-of-range chargers a more opaque color. It even tells you what power rating of charge is available, how many plugs are available, how long it will take to get there, and instant navigation to the station.

The second convenience is their speed. At the fastest pace, the newest Tesla Superchargers can add 200 miles in just 15 minutes of charging. Considering that most people only need to charge their Tesla with ranges 250-400 miles from about 20 percent battery to 65-80 percent battery at the absolute most, then that means your stay at the charging station will not be long.

In Car and Driver’s long-term study of Superchargers Vs. home charging, they found that charging a Model 3 solely at a Supercharger station cost them just over $0.10 per mile in the car’s first 24,000 miles, totaling $2,500.

If it happens that you don’t live close to a Tesla Supercharger location, or that you just prefer the idea of charging at home, then there are plenty of options. First of all, every Tesla comes with a type 1 charging cable with an adaptor for the standard 120-volt home outlet. This will let you charge without needing any additional equipment. It is also, however, essentially only a trickle charge and will therefore be of quite a low speed. According to pluglesspower.com, it would take a Tesla Model S or X a massive 4 days to charge on this setup from empty to full.

The second option is type 2 charging, which is what most home charging fans go for. Tesla’s Wall Connector is a sleek unit that can be installed in your garage or driveway. It is weatherproof and waterproof and retails for about $500 plus installation fee. This can charge at a rate of about 11kW, adding up to 44 miles of range per hour. This is far more practical, and can charge most Tesla models from empty to full if left plugged in overnight. Since most people don’t charge from empty to full, this type 2 home solution is invariably more than adequate.

Home charging is also a very affordable option. Car and Driver measured costs of Superchargers vs. the costs at home and found that on their Tesla Model 3, charging at home cost about $0.05 per mile during its first 24,000 miles, which comes to about $1,300.

Conclusion: To Save Money, Charge at Home

In the end, there is a financial premium to pay when you opt to charge at Superchargers. That premium does pay dividends, however, in convenience and speed. When you use Supercharger, you don’t need to spend money to install a home system, you get faster charge rates, and as time goes on and more stations open, your charging experience just becomes increasingly easy.

At home, on the other hand, the numbers from Car and Driver’s study show that even when you factor in paying $500 for a Tesla Wall Connector and perhaps another $200 for installation, all of that money pays for itself in your first 24,000 miles of savings, and then some. Better yet, the slightly gentler charging cycle will help to better preserve your battery integrity. In other words, charging at home is the cheaper of the two options, at least in terms of financial cost.

Superchargers are handy, but they do put greater strain onto your Tesla’s battery health. The good news is that these detrimental effects seem to be reducing as new models and better technology emerges. Many record-breaking Teslas that have covered more than 100,000 miles and most often using Superchargers have reported capacity losses of only around 2.5 percent. As with anything though, it comes with a premium to pay. The best thing remains to charge at home and save money most of the time, but then make use of Superchargers whenever you are undertaking a longer trip and need the fast miles to stay on track.