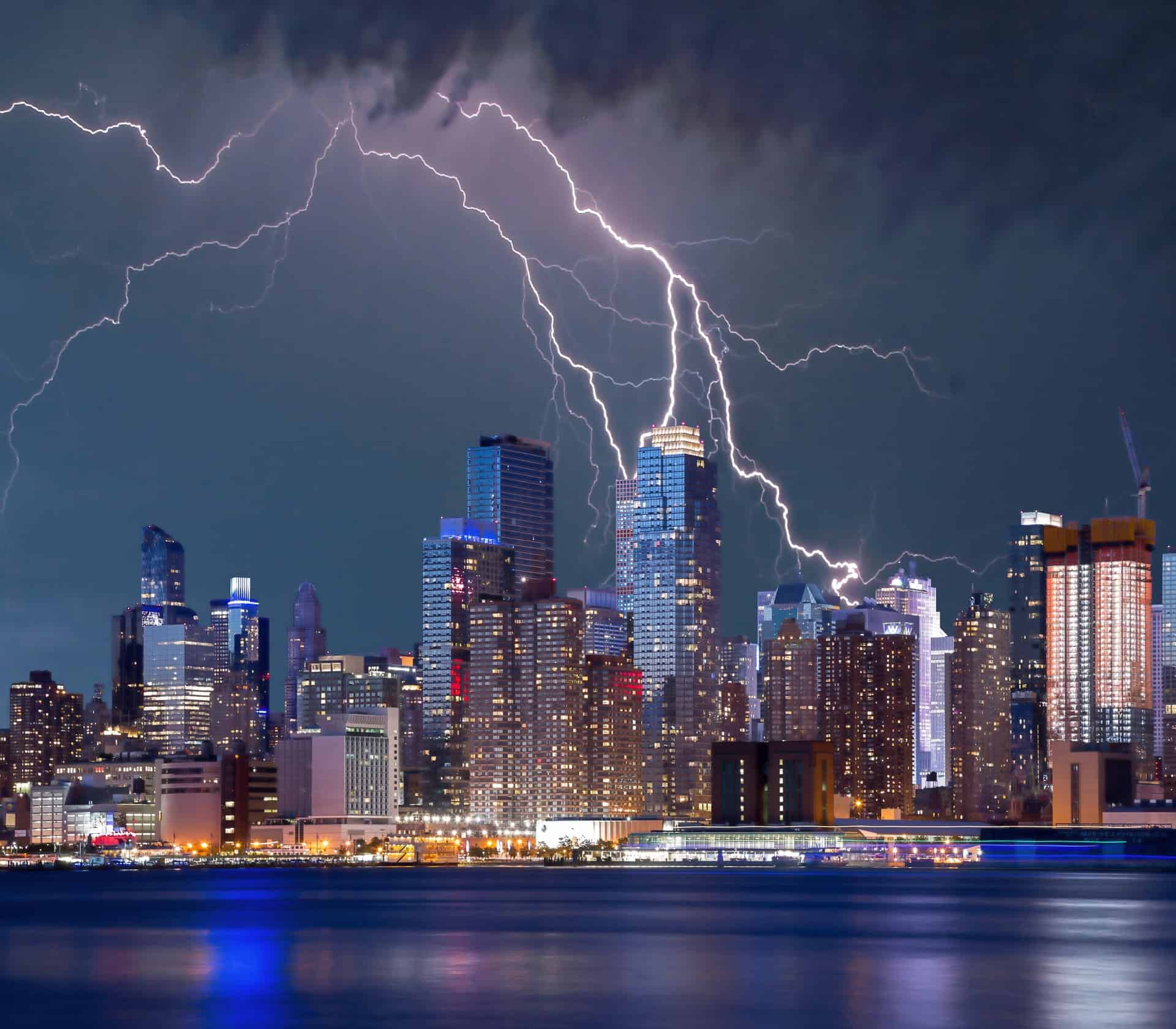 Like any other relatively new technology that begins is mass proliferation in the marketplace, there are often rumors about its safety, side-effects and other concerns. Electric cars are no different. The idea of EVs has been around for some time, of course, but it’s only in the past decade or so that they have even begun to become mainstream.

Now that multiple marques are adding EVs to their selections, and knowing that governments around the world are building momentum toward promoting electric vehicle use and discouraging — even banning — the sale of new gasoline and diesel cars within the next 15-20 years, electric cars have never been so popular. This has brought with it numerous rumors on their safety. With electric cars, one of the most pervasive speculations surrounding EVs is their safety in lightning and thunderstorms.

Electric cars are generally safe if they are struck by lightning – or at least, at no greater risk than other types of cars. But there’s always some risk from lightning, of course.

Contents hide
1 Electric Cars, Lightning and Thunderstorms
2 Dispelling the Doom-Sayer Rumors
3 What Happens When an EV is Struck While Parked?
4 What Happens If Your EV Gets Struck by Lightning While Driving?
5 Just Another Misconception

So, here’s the problem people are having. Electric cars are powered by batteries and operate using electric motors. This leads people to wonder whether these rolling boxes of electrical energy are safe to drive during a thunderstorm. The first concern comes with rain and waterproofing. Won’t the water somehow find its way into the electrical systems? The second concern is of these electrical gadgets attracting a lightning strike.

It’s not just when the car is out on the road that people are worried about, either. Many also express concerns about whether an electric car is safe to charge during heavy rain or thunderstorms. You wouldn’t leave a regular outlet exposed to falling rain like that, so what’s stopping the rain water from having the same problematic effects on your electric car and the charging station you spent hundreds of dollars to buy and install?

Electric cars may actually be able to handle rainy and wet conditions even better than an internal combustion engine. Some exciting new electric models like the Volcon Grunt electric off-road motorcycle feature IP67-rated waterproofing which make them able to continue operating even when almost submerged in water. This makes the Grunt and Volcon’s other off-road electric vehicles far better for fording streams and excess on-road water left by floods. Drive even a little fast into that water with your gasoline car and the engine will completely stall out.

Home charging is also completely safe in heavy rain and thunderstorms thanks to similar ratings being placed on the charging units. The majority of them are built to be used either indoors or out, so if it starts raining or a thunderstorm breaks out while you’re charging, there’s no immediate danger, nor is there any increased chance that the charging EV will attract more lightning than any other car would.

What Happens When an EV is Struck While Parked?

Let us now explore the questions of what happens to an electric car if and when it was to be struck by lightning. We’ll first look at what happens when it’s struck while parked. While not more likely than any other car, it still could happen. If your car is sitting parked, not charging, then a lightning strike will be channeled through the frame and into the ground. In this way, it’s like a Faraday cage.

When the car is parked, plugged in and charging, there is some risk of surge damage. The lightning strike can cause a surge of power to course through the charging system which, in theory at least, might overwhelm your car’s battery and electrical system. If this risk exists, why then do we say that electric cars are safe to charge in thunderstorms? The answer is that they remain safe because charging stations and your car’s systems are built with surge protection to prevent any kind of serious damage against sudden bursts of power finding their way close to the system.

No system is perfect, however, and sometimes the surge protections can fail. The average level of protection strength in an EV can safeguard against surges up to 2,500V. The problem is that a lightning strike can be as many as 20 times more powerful than that. If this happens, it can send a tsunami of energy into the car, damaging any and all of the electrical systems. An incident in 2015 highlighted the potential risk for electric cars that suffer the effects of a lightning strike while charging. YouTube user Sarah Day shared a 25-second video that showed what happened when a nearby lightning strike caused a surge of power in her Tesla Model S:

“Lightning struck near my Tesla while supercharging. The car went nuts and the 12V battery almost died. It couldn’t even be towed because the supercharger cable couldn’t be disconnected.”

It further described how warning lights on the dash all lit up simultaneously, and eventually the battery died leaving Day stranded, waiting for assistance. While it sounds bad, neither the system nor its components were “fried” exactly. They were overwhelmed by the initial effects, but were then restored to working order relatively quickly. This shows that at least some measure of the protections in place were able to safeguard the viability of the Tesla’s essential parts, and no lasting or serious damage was caused.

This was a fluke in many ways. The lightning didn’t strike the car or the charger itself, but rather nearby, which sent the surge of power toward and into the charging system. This shows that it wasn’t the charging car that attracted the lightning, but rather a terrible stroke of bad luck.

What Happens If Your EV Gets Struck by Lightning While Driving?

If you were driving along and encountered a lightning strike, then your car would once again act as a Faraday cage, channeling the energy through the frame and into the ground without touching you or any of the car’s key systems. As with any lightning strike, it’s not necessarily the electrical part that is dangerous or damaging, but rather the heat.

Electronic components that you use within the car are not connected to anything on the outside of the car, meaning that the strike of lightning won’t affect them as the energy is channeled safely into the ground. The batteries, too, are very strongly encased and protected from both water and external surges. These systems are designed to not be affected by purely external forces like lightning.

Once again, no system is fool-proof and so EV makers build further protections into the vehicle to detect and protect against any surge that has, somehow, made its way toward the internal circuitry. In such a case, you may notice some flickering or flashing lights, but the system should deal with the excess power and then continue running normally. The main point of the design is to prevent worst-case scenarios like fires, blowouts and breakdowns.

Ultimately, the concerns that people have surrounding lightning, rain, thunder and their electric vehicle are mostly unfounded. There is some risk of surges when a strike occurs close to or upon a circuit when charging is in progress, especially supercharging, but even then, the risk is minimal thanks to additional surge protection systems built into the chargers and the cars themselves.

With our long-held notion that electricity and water do not mix, it’s natural for people to have these misconceptions about EVs. Over time, they will gradually disappear as people realize that times have well and truly moved on.