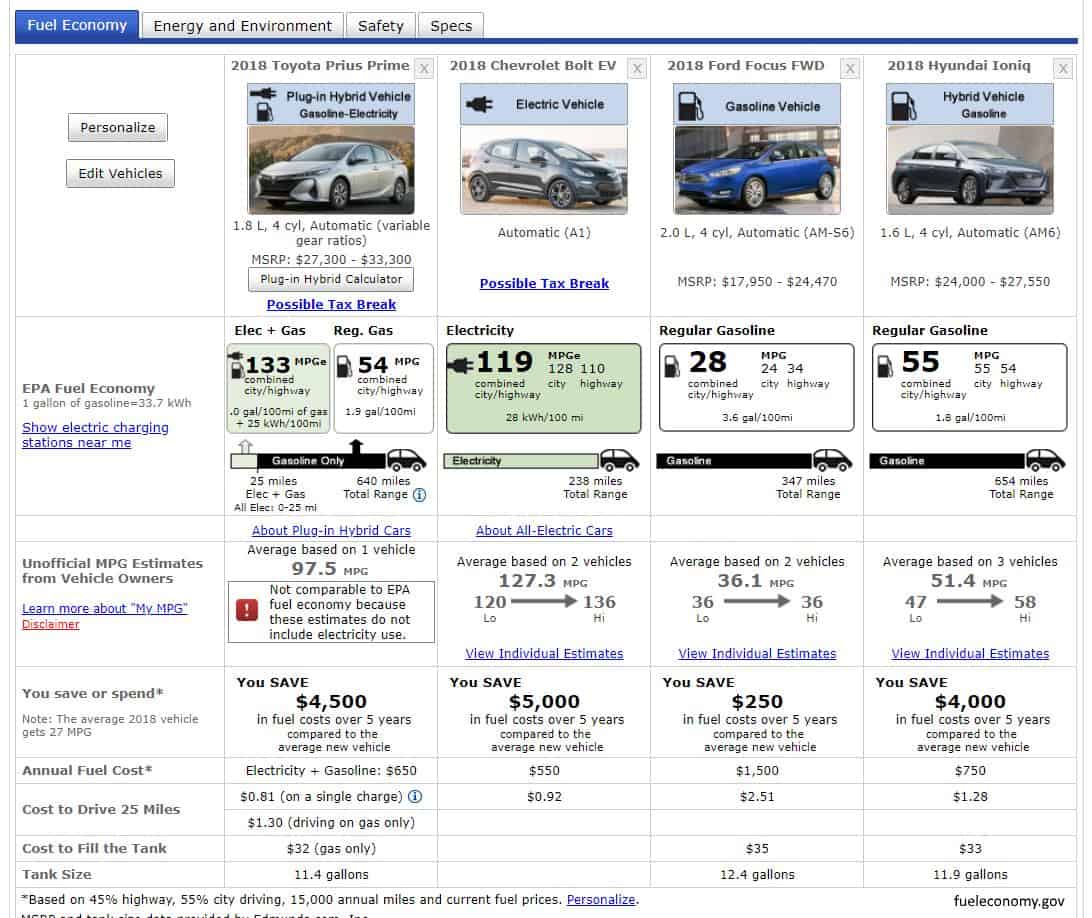 As you’re no doubt aware, there’s multiple types of green car: traditional hybrids, EVs (electric cars), plug-in hybrids and hydrogen fuel cell cars. The technology (and infrastructure) powering green cars is progressing all the time, but are they a match financially for standard gasoline autos? This article will find out.

This article will cover the following types of cars which we briefly mentioned earlier:

Using the handy US Government (FuelEconomy.gov) tool website, we will compare four cars:

All models are 2018, and the results for the fuel costs are:

The fuel costs here are broadly what you’d expect: the fully gasoline powered Ford is most expensive, then the traditional hybrid is next. Following on, there’s the plug-in hybrid; and the pure electric is cheapest.

In other words… don’t buy a random fully electric vehicle and expect it to pay for itself quickly! As we see in the Model 3 vs Audi A4 section, a pure electric can pay itself off fairly quickly, but you just need to choose wisely. Or at least, you do if you’re buying for financial reasons.

The stats also show that traditional hybrids are still a pretty good choice financially: they don’t cost much more to purchase, but their fuelling costs are decently lower.

Running Costs: Hyundai Ioniq in the UK for a Short Commute

GoUltraLow – a UK Government and car industry joint project – has a really handy tool (similar to America’s EPA website) which allows you to pick two cars and compare their running costs.

The Hyundai Ioniq is available in multiple forms (hybrid, PHEV and BEV) so we’ve used this in our comparisons for people who would use this car for their daily commute: 15 miles each way, hence 30 miles a day Monday-Friday.

The tool used an average electric cost of 14p per kWh and 129.1p petrol per litre costs.

Clearly the BEV is cheaper overall to run than the PHEV, resulting in £180 per year savings. But at £850 more, it would take 4.7 years to ‘pay off’ the extra cost of the pure electric version.

Naturally, however, the more miles you do with the BEV, the lower this pay-off time would be.

The calculations here are different. It costs 50% more in fuel to run with the pure hybrid, but (just for this daily commute) this only amounts to £185 per year more. Hence with costing £2,305 more, the pay off time for the PHEV would be 12.5 years.

Naturally these figures don’t include maintenance costs, but in our opinion they demonstrate that the UK’s not completely there with respect to making PHEV/BEV a financially sensible choice.

Comparing Hyrogen fuel cell car running costs to other types of vehicles isn’t the easiest because various comparison tools tend to treat Hydrogen cars separately (possibly as there’s so little infrastructure and demand for them currently). However the FuelEconomy.gov webpage shows that annual fuel costs are $1,250-$1,500 on their standard measures. This compares to costs of $550-$750 (as seen earlier) for more mainstream types of green car.

Motortrend’s review of the Toyota Mirai (Toyota’s only hydrogen car, and one of only a few hydrogen cars available) calculated Hydrogen fuel cell costs worked out at 26¢ per mile. This is after Toyota’s current offer of $15,000 of free hydrogen fuel for the first 3 years of Mirai ownership. This would equate to $6.50 for a 25 mile journey, almost 3 times more than the Focus FWD we looked at earlier. So this seems quite high in comparison and thus we wonder if it’s completely accurate, but the general consensus is that hydrogen fuelling is currently more expensive than gasoline fuelling, so we feel that it’s worth mentioning.

In the UK, the Standard have calculated that hydrogen cars cost 17.4p per mile in fuel, compared to 16.3p per mile for a traditional 40 mpg petrol (gasoline) vehicle.

In short, it’s still a little tricky to judge hydrogen fuelling costs, but the gist is that they’re nowhere near as good as hybrid/PHEV/BEV fuel costs and are close to (or more than) gasoline costs. This is expected to drop as hydrogen infrastructure increases, however, so we’ll review this area in the future.

Here we got for a slightly different UK based example: a Nissan Leaf 2018 versus a Ford KA 2010 gasoline. They are both small cars, and we’ll assume that they are used just once a week for a 150 mile journey (perhaps people who don’t work, visting family once a week)?

So the fuelling costs are substantially cheaper, but the price to buy the Leaf is very much more expensive. And unfortunately, this is one of the cheapest electric cars in the UK.

This might seem like a silly example, but a small car like the Leaf would be similar to a £10k-£11k petrol car in the UK, and plenty of people do a very small number of miles throughout the week (then a bigger journey more infrequently). So clearly for this case, it’s worth sticking to a small, cheap petrol car.

It can be tricky to compare the running costs of a luxury gasoline car with a luxury electric car, particularly as fuelling costs (and EV subsidies) vary per state. Therefore we’re happy to have found the following great video which calculates the averages for us:

So in this case, the pay-off time for the Model 3 is 3.6 years, a pretty good pay-off time considering that the Model 3 is better technologically. And especially good when you consider that the $35,000 version should be released in 2019 – meaning it’ll be cheaper in all respects than the Audi A4.

When buying (or leasing) a car, the price is fairly obvious: gasoline are cheapest, then traditional hybrids are next cheapest, then PHEV. The pure BEV/FCEV cars are then the most expensive.

However the fuelling costs (excluding hydrogen fuel cells) are the opposite: electric/BEV is cheapest, then PHEV is next cheapest, then hybrids, then gasoline.

Unfortunately as this article has shown, it’s rare that a PHEV, BEV or FCEV will pay for itself in a couple of years: it’s more like 3-4 years in the best case, but often (much) more. So it’s definitely a balancing act, and if you’re looking for a PHEV/BEV/FCEV to save money, you would need to choose very carefully.

But thankfully, the buying/leasing price of such cars is falling all the time, whilst the price of gasoline (hence powering a traditional hybrid too) is rising. So the cost/benefit ratio of owning truly green cars is heading in the right direction.