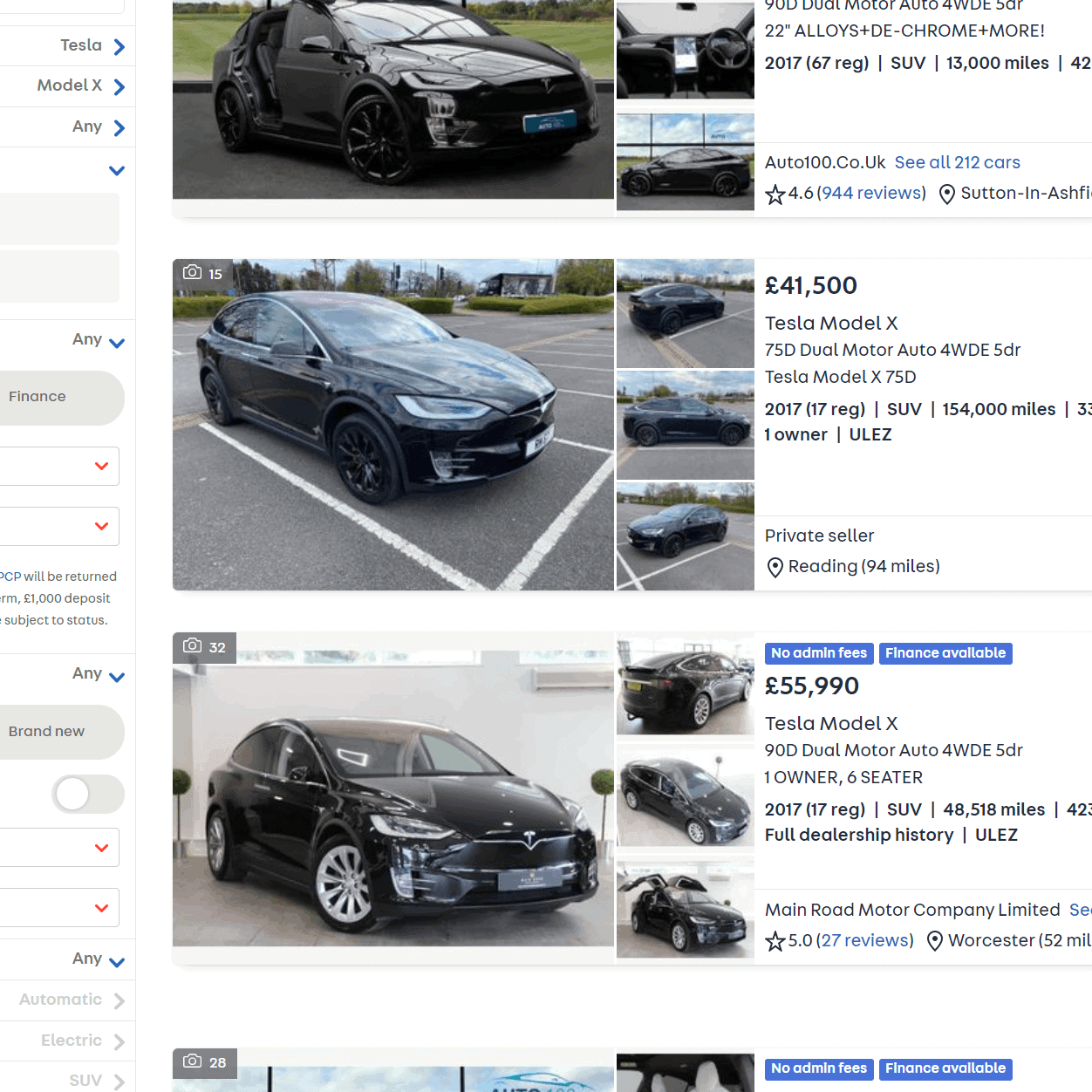 Even when you can take advantage of federal financial incentives and rebates, buying a brand-new Tesla is a pretty expensive proposition, especially if you want the long-range abilities and all the extra luxuries that really help to set this brand apart. For this reason, many are opting to skip the depreciation and by a pre-owned Tesla.

How Many Miles is Too Many?

When entering the world of the pre-owned Tesla, a new question arises. Namely, how many miles is too many before you draw a line and say that this Tesla is a bit “too used”? That is the primary question that we are asking in today’s blog.

The average passenger vehicle should have a lifespan of around 200,000 miles. While there are some brands of car that boast of bucking that trend, it’s a pretty solid statistic that’s widely acknowledged as a typical car’s limit. But are things all the same when it comes to electric vehicles?

Does Mileage Matter at All for an EV?

To get started, we will consider this question that reflects a widely held view among the EV driver community. In essence, the belief is that since an electric car is not subject to the same mechanical wear as that of a conventional car with an internal combustion engine, then mileage as we have previously understood it as a metric for buying used cars, doesn’t apply in the same way.

It makes sense when you think about it. When we’re buying a gasoline car, how many miles are on the clock really matters because it is a strong indicator of how much journeying the car has been through and, by extension, how likely there is wear and tear to worry about. It is for this reason that sellers of regular gasoline cars are quick to write into any advertising or include in their sales pitch that “this car has recently been serviced to repair A, B, and C. Parts D and E were recently replaced and it’s hand brand new Fs just last week.”

An electric car works on very different principles, without the mechanical wear and tear and so, in the view of some people, without the same concern on mileage. However, there is a counterpoint to this opinion which centers around the heart of Tesla’s operation: the battery.

A Tesla, just like any other EV, relies entirely upon the health of its main battery pack. These packs are the heaviest single component in your Tesla, and sit on the underside of the car helping to create that magnificently low center of gravity that helps your Tesla feel like a sports car as you drive it around corners. The health of the battery depends on how many times and at what strength it is charged, and charged to what degree. There’s an ongoing debate between EV users of different brands as to what is the ideal pattern of charging that best preserves the life of the car battery. In any event, the battery is subject to the same entropy as the mechanical parts in an ICE vehicle. As the battery declines, so does your EV’s range.

In our view, this is a good starting point to discuss our topic about how many miles is too many for a pre-owned Tesla. If you have a good idea on how long the Tesla battery is supposed to last — something that is certainly connected to the mileage on the odometer — then you can have a good idea on where a used Tesla is in its lifespan from its mileage.

How Long Do Tesla Batteries Last?

On April 13, 2019, Elon Musk responded to a tweet from a user speculating on the profitability of a “robotaxi” assuming that it would charge $1/mile and last about 150,000 miles in its service lifetime. Each robotaxi would therefore generate $150,000 in revenue over their lifetime, the user pointed out.

Musk’s tweet the following day discussed the lifetime of a Tesla Model 3 battery, and also how much it would cost to then replace that battery pack. Here’s what the tweet said exactly:

“Model 3 drive unit & body is designed like a commercial truck for a million mile life. Current battery modules should last 300k to 500k miles (1500 cycles). Replacing modules (not pack) will only cost $5k to $7k.”

Anyway, his larger point reveals an estimate, further supported by SolarReviews, that the current Tesla battery technology is designed to last for 300,000 to 500,000 miles. Elon’s talk of the million-mile battery is exactly the kind of huge promise that the world expects of this unique entrepreneur. Exactly when he might deliver such a battery remains the more pertinent question in this scenario. Right now, however, the prospect of 300,000-500,000 miles is still very impressive. It puts Tesla ahead of the common estimates for ICE vehicles (200,000 miles).

It’s hard for us to know any of this for sure since the current technology hasn’t been around long enough for anyone to test it to the mileage of 300,000 or more. On average, Tesla batteries degrade by roughly 10 percent after 160,000 miles of use. That’s very impressive as car batteries go, as anyone who bought the original Nissan Leaf might tell you. First-generation Leaf owners who are still driving the car will attest to having lost as much as half of their already limited original range of around 100 miles.

Who is Driving the High Mileage Teslas?

So the claim is out there that the total life is 300,000 miles at least. As we mentioned above, with the technology all being relatively new, it’s hard to know for certain if these numbers really add up. The year 2019 threw up some interesting stories for two of Tesla’s best-selling models, the Model 3 and the Model S. Each car gives us some of the best insight into how the cars fare when they start to reach the higher end of the mileage spectrum. Finally, we’ll also tell the story of current world record holder for EV mileage, Hansjorg Gemmingen.

In October 2019, Electrek reported the story of Arthur Driessen as probably the first person in the world to push the Tesla Model 3 over the 100,000-mile mark. He reserved his Model 3 in 2016, and received it in March 2018, exactly two years later. He covered 20,000 miles in the first six months of ownership, which is obviously a lot more than the average driver would do, but it does offer some insight into the durability of Tesla’s batteries.

By October 2019, he had covered 100,000 miles driving all over North America. During his many journeys, he has experienced a few technical problems, but only those caused by certain forces majeures, including driving through a valley stream causing the need for a new control arm, and having the door hinge beaten senseless by the crazy high winds of Utah’s Bonneville Salt Flats. His tires were lasting him about 25,000 miles per set when properly rotated, and the costs for part replacements came to about $500

He kept the battery level, on average, between 10 and 60 percent, using superchargers to charge it quickly. In Driessen’s words, the Model 3 has been holding up “amazingly.” By the time he reached 100,000 miles, he apparently had only lost 2.5 percent of battery capacity, dropping the total range from 310 miles to 302-308 miles.

On August 11, 2020, it was reported that Steve Sasman broke the 250,000-mile barrier in his 2012 Tesla Model S. Sasman has been driving the Model S like crazy around North American and in particular documenting the maintenance costs that he endures throughout the epic journey.

First and foremost, Sasman’s 2012 Model S P85 is, as far as his own photos show, in great condition. A quarter of a million miles don’t seem to have taken away from this car’s great looks. Normally you can tell when a car has been put through that much mileage, but it’s genuinely hard to find the signs of it with Steve’s Model S.

Sasman had previously checked in with the blogosphere in 2019 after hitting 200,000 miles. At the time, he reported that he had spent a total of about $5,415 on maintenance on the vehicle. He estimates that this would be about half or even a quarter of what you might spend on a $100,000 German luxury car after driving the same distance. Broken down, his costs included:

Sasman further estimated that his all-electric Tesla driving had saved him a humongous wad $20,000 thick in gasoline costs. He maintains that spending the money on buying a Tesla was a “smart financial decision.”

Another Tesla Model S story comes from one Hansjorg Gemmingen is currently the world record holder for Tesla Model S mileage. In November 2019, his Model S P85+ hit 1 million kilometers (621,000 miles) and he was personally congratulated by Elon Musk on Twitter.

Don’t get overly excited, however, because Gemmingen’s amazing distances have not been achieved without some considerable maintenance also being done to his car. In late 2020, Gemmingen crossed the 745,000-mile mark, putting him at the closest that anyone has come to getting a Tesla over a million miles, which will arrive when he hits the 1.6 million kilometers mark. His maintenance has included four motors and three battery packs.

Buying a Used Tesla – How Many Miles is Too Many?

The above examples show us that Tesla may not be exactly at the point that Musk wants with its million-mile battery, but they are clearly doing well. Sasman’s example shows that the estimate of 300,000 miles at the low end is likely very fair indeed. Furthermore, Driessen’s example shows the true resilience of the Tesla battery, with his 100,000-mile Model S losing less than 3 percent of its capacity over its long journeys.

Sasman’s example also proves that assuming the battery is healthy, other maintenance costs are minimal. You should likely therefore feel pretty confident buying a pre-owned Tesla at just about any mileage under 100,000 miles, right?

These considerations may look familiar, and that’s because they should be. The truth is that even though electric cars in general and many Teslas specifically are rather new, there are still long-held principles and precautionary measures that one should take when buying used cars. They apply just as well when buying a pre-owned Tesla.

The good news is that the data from high-mileage Tesla cars is looking great. These aren’t just cars that have been through the humdrum of everyday errands and school runs. These are cars that are driven at long distances across the country and even the entire North American continent. That means that these Teslas are being tested to the extreme. Therefore, the results they garner should be very encouraging for anyone looking at a used Tesla for everyday use, regardless of the mileage.

In the end, try to look a bit beyond the mileage and get as much information on the car as you can before you decide to buy it.