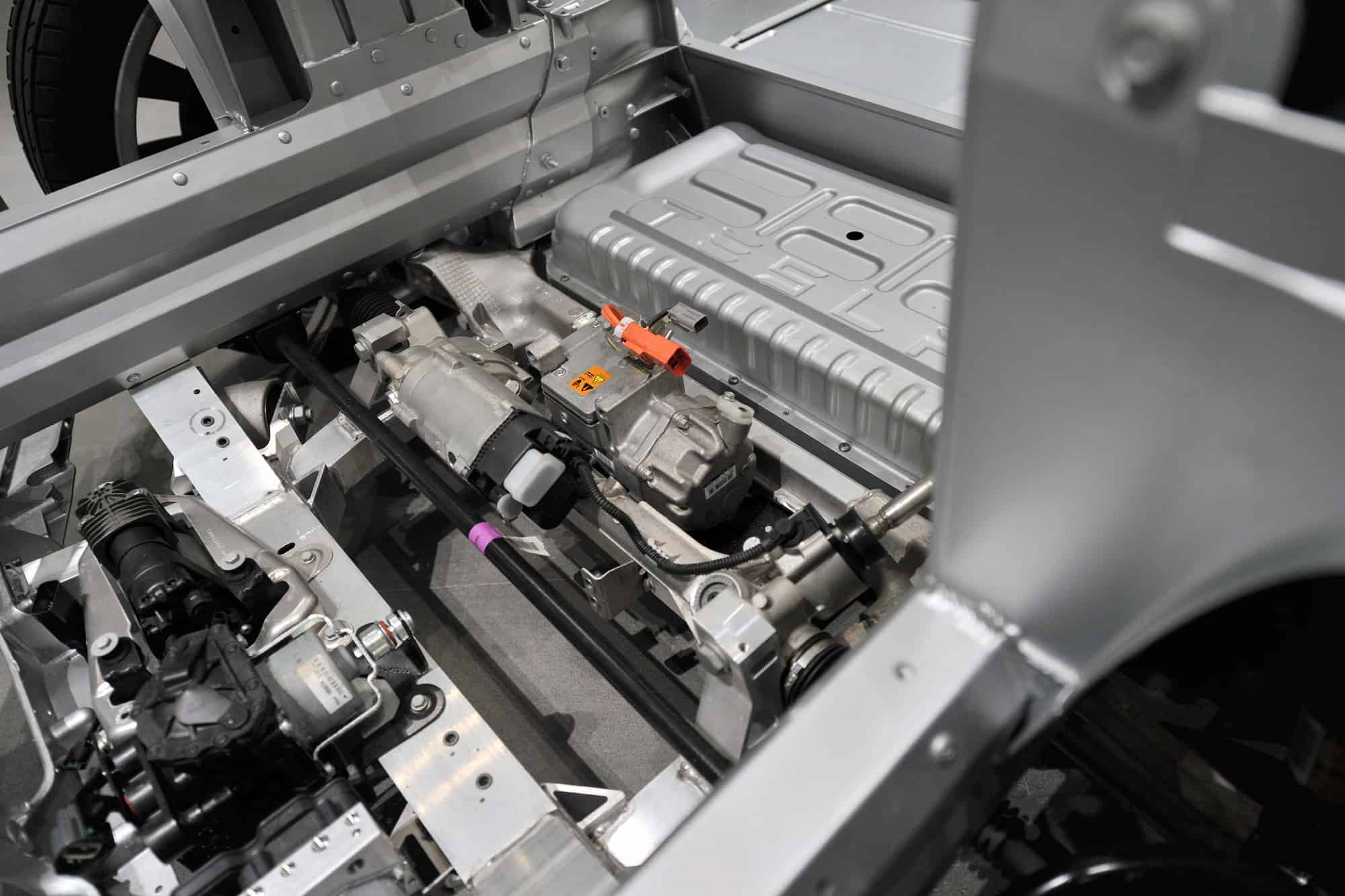 Read just about anything on an internal combustion engine and one fact will emerge common to all of those articles and other materials — the engine is a mass of individual moving parts all working together toward the goal of giving power to propel an automobile forward. The key phrase here is the “mass of individual moving parts.” These components number in the thousands, with some estimates placed at as many as 2,000 moving parts within an internal combustion engine vehicle.

This brings us to the focus of today’s article. How might a Tesla differ from an ICE car? How many moving parts does the typical Tesla car have? The answer might surprise you. It’s certainly a lot less than the many hundreds, or perhaps even as many as 2,000 moving parts that you would find in a regular engine.

Contents hide
1 How Many Moving Parts Does a Tesla Have?
1.1 Your Tesla – Complete Without…
1.2 Does the Number Differ Between Tesla Models?
2 Is There Any Good News for ICE Drivetrains?
3 Tesla: Market Disruption
4 Tesla: Price Crusade
5 Conclusion: Simplicity in the Air

How Many Moving Parts Does a Tesla Have?

There’s been claims in the past that Tesla cars only have 17-18 parts in their signature drivetrain, compared with what they estimated as 200 in a conventional ICE drivetrain. If we are extremely generous and use this very conservative estimate for the number of components within an internal-combustion drivetrain, then Tesla is still operating with less than 10 percent of the number of parts than regular cars. At the high estimate, it’s only 1 percent of the parts.

Let’s be very conservative and round the numbers off to say it’s 20 moving parts in a Tesla. What are those moving parts? Here’s one way of looking at it:

These are the literal moving parts that a Tesla has. It’s important, however, to reflect a little more deeply on what exactly we mean when we say “moving part.” Do we mean something that physically shifts up and down, left and right? Or, do we take a broader meaning to include parts that themselves don’t move but perform a critical function, such as spark plugs?

This may explain the difference between the estimated numbers of moving parts in ICE drivetrains, but it offers great food for thought. What if instead of thinking about the moving parts that Tesla does have, we think of all the parts that a Tesla does not have?

Your Tesla – Complete Without…

It’s when you see how long the list of things that a Tesla doesn’t have that you start to appreciate how much of a difference an electric vehicle really makes. The drought of moving parts within a Tesla has profound implications for the future of cars and driving.

Does the Number Differ Between Tesla Models?

While there is some difference between specific model years and drivetrain versions, the number of moving parts doesn’t shift dramatically at all between Tesla models. All hold the same basic estimate of 17-20 moving parts. That’s the official story, at least. In the end it does depend somewhat on what you think constitutes a moving part and how you divide those parts up.

For example, how many individual components are there to a power window? Does each small component count as a moving part? What about door locks? Technically they do move in order to open and lock the door, and yet traditionally they are not counted among the moving parts in any car, and so it is with electric cars.

One way to vary the number of parts would be to order a Tesla model with a different number of motors. The dual-motor AWD Model S, for instance, will technically have at least one fewer moving part than the tri-motor AWD model. In the end, however, whichever Tesla you own, you essentially share the same advantage of few moving parts.

Is There Any Good News for ICE Drivetrains?

Today’s blog shouldn’t be seen as an attack on the humble internal combustion engine. It’s wrong-headed to assume that “ICE = Bad; EV = Good” when it comes to engineering. Considering the number of moving parts, be it 200 or 2,000, there are a great number of combustion engines that work superlatively well for 200,000 miles or more.

The automotive industry has built itself on the ability to enhance and improve its combustion engineering in precision, quality and reliability. The fact is that engines in 2021 don’t break down anything like as much as they used to back in the 1970s and 1980s. It’s a testament to the skill of automotive engineers.

That’s the good news on internal combustion engines. Having said all that, and while none of today’s blog constitutes an attack on the ICE drivetrain, the fact that we now see the emergence of electric vehicles, led in technology by companies like Tesla, the dramatic difference in the number of parts and the resulting simplicity of maintenance simply cannot be ignored.

The first big implications of Tesla’s lack of moving parts is felt on the wider automotive market, and is a major role in the wider cast of EV disruption. Speaking at the Swedbank Nordic Energy Summit in Oslo, Norway, on March 17, 2016, Tony Seba gave a presentation entitled “Clean Disruption.” The talk explained why conventional energy and transportation will be obsolete by 2030:

In the talk, Seba covered 4 categories of clean disruption, the second of which was electric vehicles. While each one was disruptive in its own way, he remarked, the four elements work together to form a “virtuous cycle of disruption.” For EVs, Seba described how the early days of the Tesla Model S showed the disruptive potential, with Consumer Reports famously scoring the car 103 out of 100, and the Model S beating out the likes of BMW and Mercedes-Benz to become the best-selling luxury sedan model in the US.

Seba went on to ask, however, that with Tesla’s high price tag, could it really be so widely disruptive to the mass market? Even with so few moving parts and the many mechanical benefits that result, can it become the true car of the people? Seba pointed to the key benefits of electric motors compared with ICE drivetrains:

If you look at the third point, Seba uses the high-end estimate of moving parts, showing that Tesla’s cars have less than 1 percent of the moving parts that an ICE car has. Even if we make that our lower estimate of 200 parts in the regular car, that makes the maintenance from 10 times to around 100 times more in the ICE vehicle than the electric one.

Of course, it doesn’t always work out so handily as that, but Seba reminds us that where we can find a difference factor of 10 times or more, we find disruption. Therefore, it’s safe to say that Tesla’s lack of moving parts has profound implications for the automotive market.

The unfortunate fact for EV acolytes is that the cost of EVs is still the main thing holding them back currently. The 2021 Tesla Model S, for instance, comes in either dual-motor or tri-motor variants, both AWD.  The Long Range dual-motor version gets 412 miles on a single charge, has a top speed of 155mph and can accelerate from 0 to 60mph in just 3.1 seconds. It’s also $74,490 MSRP, and that’s after the federal rebates and savings have kicked in. The tri-motor Plaid+ model (the top end) will set you back $144,490, though its range does increase to 520 miles, its top speed to 200mph and the 0-60mph speed falls to under 2 seconds.

Hang on a second…if the typical Tesla — and other EVs — only have a couple of dozen moving parts, then what is it that’s making them cost so much? The key to that lies in that aforementioned heavy item bulking up the undercarriage: the battery. EV battery technology is the main factor behind them being so expensive to purchase. There’s so much money that has been invested in these cars to develop them, give the longer range and more. That expense it unfortunately passed on to you, too. The trend, however, remains downward, as we’ll cover more further below.

These prices are hardly indicative of a mass-market vehicle, but perhaps it’s not fair to just look at the Model S. Over the years, Tesla has continued to make good — sooner or later — on Elon Musk’s lofty promises to create lower-price EVs that all households can afford and benefit from. The Model 3 is a great example of a step in that right direction.

The Model 3 is a lot more affordable, starting at $33,690 for the RWD model, and the top-end Performance trim starting at $51,690 after all rebates and savings are accounted for. That’s quite a jump down from the Model S. In fairness, the performance is also something of a step down, though it is still impressive by all accounts. The Model 3 has a base range of 263 miles (315 miles on the Performance model), a top speed of 140mph (162mph on Performance), and 0-60mph speed of 5.3 seconds (3.1 seconds on Performance). The top-end Performance is a third of the Model S Plaid+, but it’s performance statistics are not. Tesla does appear to be on the way down the price ladder and getting closer to their dream of top-quality mass-market EVs for all. The next barrier to break is the tricky $30,000 line.

Conclusion: Simplicity in the Air

When thinking about the number of moving parts in a Tesla, one can’t help but be astonished by the apparent “giant leap for mankind” we have taken in the automotive world. While ICE cars continue to be burdened with their fundamental moving parts, as well as an increasing weight of ADAS technology, entertainment technology and other electronics, EVs are managing to bring all the modernity of cars with far fewer of the complications.

Teslas and EVs don’t set themselves apart just from the sheer reduction in the number of moving parts, but also in the very methods through which the cars are maintained and upgraded. Tesla’s use of over-the-air updates has at first astonished the world, especially when Tesla demonstrated in 2018 that they could be used to repair even mechanical problems. When the company released an update in May of that year that helped to alter the Model’s anti-lock braking algorithm, the result was a reduction in 19 feet to the braking distance from 60mpg. The seismic implications of this must have sent a shiver down the spines of mechanics.

As if it wasn’t bad news enough for mechanics who have dedicated a career to the mastery of hundreds or even thousands of individual components, what they do and how to fix them, along come a bunch of nerds in California sending similar expertise via the Internet. Therefore, in the end, the reduction in the number of moving parts that Tesla represents is more than just a move towards simplicity in construction, but also of ownership. The notion that owning a car can be more like owning a smartphone, with customization, updates and fixes all sent over the air is steadily becoming the reality. The age of the grease monkey could soon be over.