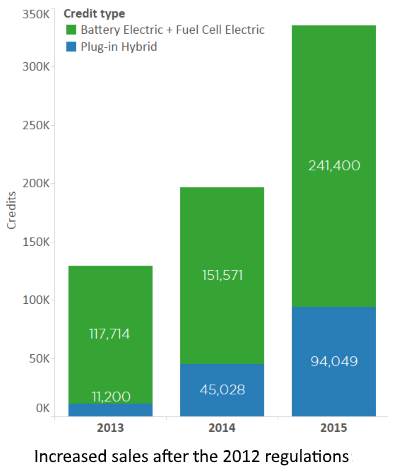 When looking at the (big) list of electric and hydrogen cars, you may have noticed that some of the vehicles listed (made by mainstream manufacturers) are not ones that you have seen on the dealer forecourts. Back in 2012, the CARB launched the Zero Emission Vehicles regulations.

This made it mandatory for the state’s six biggest car manufacturers (those selling over 60,000 vehicles per year) to offer one or more zero-emission green cars, otherwise they might lose the ability to sell any cars in the state. The ‘big six’ (Chrysler, Nissan, Ford, Toyota, GM and Honda) already had green cars in progress, but this focused their minds and ensured they were fully committed to offering them up ASAP!

Indeed, the regulations said that 0.79% of their sales in 2012 (3% in 2013 onwards) would have to be from zero-emission vehicles! Hence the following cars were developed and released for sale:

These are deemed to be compliance cars because they were designed specifically with the goal of meeting the CARB’s regulations. * The Nissan Leaf avoided the ‘compliance car’ label however, because it was sold in increasingly large numbers (in all states, not just California) and was never developed purely to meet CARB’s policies.

Since it was announced, other states have also adopted this (or similar) regulations:

This is why the Honda Fit EV was originally launched in California and Oregon, and then rolled out to New York, New Jersey and 3 other states – i.e. purely to meet those state’s zero-emissions regulations, as and when they got introduced! Toyota RAV4 EV is only available in California.

What if they don’t sell enough?

CARB’s regulations cover more than just “sell 0.79%-3% of green cars in this state”. They also allow car manufacturers to ‘earn’ zero-emission ‘credits’ in different ways (such as simply producing electric or fuel cell cars, and even producing hybrids earns some credits). These credits can then be bought and sold by other manufacturers.

Tesla have wracked up a fair number of zero-emission credits, and then have been able to sell these to the six affected car manufacturers (or at least, any that aren’t selling enough EVs to meet the quota). GM have been known to cash in on this to meet the quota. Indeed, GM spokeswoman Annalisa Bluhm has implied that their Chevrolet Spark EV sales have not been great in California or Oregon:

“Every Spark EV sold in California and Oregon means we can sell other vehicles, so it’s well worth the investment.”

But by being able to buy more zero-emission credits, they have met the CARB’s quotas (whilst still expanding their brand awareness).

We hope this guide has been helpful! If you’re really interested in this California regulation and want to learn even more (well, a lot more), check out the 131 page guide on it!

Alternatively, the below CNET video guide gives another overview of compliance cars: